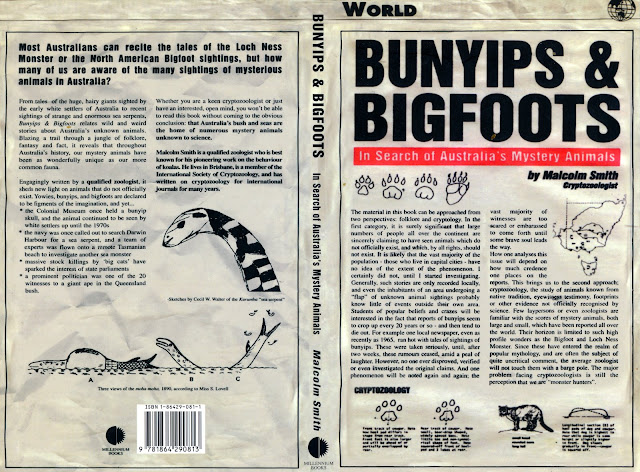 Bunyips and Bigfoots. In search of Australia's mystery animals. (Millennium, 1996)

This book was originally published in 1996, and is now out of print. Since then, the value has gone up exponentially. At the time of posting, good used copies are being offered on the US branch of Amazon for $999 US (which I think is extraordinary). In fact, as of November 2013 some-one was offering it for sale at £3,000 (that's pounds, not dollars!), but more often the price runs in the region of $100 to $150. 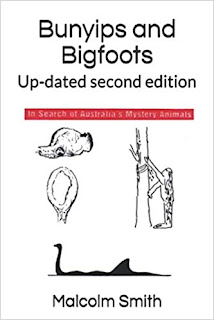 However, in 2021 I  self-published a second, revised edition, in both paperback and Kindle format, and at a reasonable price. Here is what it looks like.
What's it about?
For a start, don't believe the claims of some Amazon vendors that it is a hardback. It is a high quality trade paperback.
As you will have read on my home page, I took my degrees in zoology. I have also long been interested in cryptozoology: the investigation of alleged animals not officially recognized by science, but whose existence is suggested by native tradition, eyewitness reports, footprints, or other traces. Long ago, I decided to produce a book on Australia's mystery animals, and as I delved, the evidence accumulated - far more than I expected. It hasn't stopped yet, but this book is the result. And, being a scientist, I have provided references to every statement and report. Maps and illustrations are also included.

Details about the chapters.
Introduction. 3 pages
1. The Passing of the Bunyips. Everyone knows that the bunyip is the mythical monster of Aboriginal tradition, but what isn't known is that it was taken seriously by white settlers, and sightings were reported by them every 20 or 30 years until the 1970s. This chapter sets out the evidence, and makes some attempt at an explanation. 22 pages + 52 references (in the first edition; the second edition contains an addendum on what has happened in the last 25 years.)
2. Yes, Virginia, There Are Sea Serpents. A comprehensive - and probably definitive - catalogue of sea serpent sightings along the Australian coast, along with some anomalous carcasses washed ashore. 40 pages + 83 references.
3. A Legend Stalks North Queensland. This covers the famous "North Queensland marsupial tiger", which has never been caught, but had actually been listed in two classic Australian mammal guides. 23½ pages + 33 references.
4. The Thylacine Moves to the Mainland. We all know that the thylacine, or Tasmanian tiger, became extinct in Tasmania last century (or did it?), and it became extinct on the mainland a few thousand years earlier with the arrival of the dingo. What bothers me is that a lot of people are reporting seeing the animal on the mainland - and many of those reports are not so easy to dismiss. 20 pages + 59 references.
5. The ABC of ABCs. The initials stand for "alien big cats". All over the south and west of the continent, people have been seeing huge cats, regularly reported as black panthers or cougars. Massive stock losses, bearing all the hallmarks of cat attacks, have sparked interest by state parliaments. The material on this topic is extensive, and even this large chapter could not cover it completely. 24 pages + 60 references.
6. Apes Down Under? This chapter covers the yowie - the "bigfoot" in the title - a huge ape very, very similar to the sasquatch or bigfoot reported in North America. It is something which definitely should not exist in Australia, but the evidence appears to be overwhelming. I started this chapter as a non-believer, and halfway through, I became a believer. 24 pages + 58 references.
7. A New Zealand Mystery. This covers the waitoreke, a mysterious small mammal reported from New Zealand for the earliest days - in a country which has no known land mammals. 7 pages + 14 references.
8. Odds and Ends (Mostly Odds). A miscellany of strange reports, including the Ompax hoax, questionable stories of diprotodonts and giant goannas, and some more credible sightings of crocodiles far south of their normal range. The chapter also includes some extraordinary sightings of animals like nothing on earth. 9 pages + 29 references.
9. So, Where Do We Go from Here? In this final chapter, I give my opinions as to how unknown animals ought to be investigated in Australia. 8 pages.

No, I don't mind giving free advertisements to the "competition".
Out of the Shadows, mystery animals of Australia, by my friends, Tony Healy and Paul Cropper, was published two years before Bunyips and Bigfoots, and bears a similar price on the secondhand book market. The two books are sister works, with about 50% overlap in content. The best way to describe them is to say that one has greater breadth, and the other greater depth. Shadows covers the same ground, but in more detail, as chapters 1, 3, 4, 5 and 6 of B&B ie bunyips, mainland thylacines, alien big cats, the north Queensland tiger, and yowies. It does not include all the cases in B&B, but it covers extra ones, and has many more illustrations. Nevertheless, it does not include the waitoreke, or the odds and ends, and it has nothing on sea serpents - its major deficiency. However, if you want to know about the search for the Tasmanian tiger in Tasmania itself, then Shadows is the book, for its absence is the major deficiency of my work.
Moving to books which are still in print, and which each cover one aspect of the mystery -
The Yowie, the search for Australia's bigfoot, also by Tony Healy and Paul Cropper (2007). This must certainly rank as the definitive, and most comprehensive, review of the evidence concerning the yowie.
Australian Big Cats. An unnatural history of panthers, by Michael Williams and Rebecca Lang (2010). Although it is not as comprehensive as the previous work, this is only because the amount of material is so vast that no book could encompass it fully. At 434 pages, it provides an enormous amount of information on the subject, especially that which has come to light in the last decade, as well as copies of many official government documents.
Of course, these cover only two of the mystery animals described in Bunyips and Bigfoots.
Posted by Malcolm Smith at 4:31 AM