Theophila was born on the Eyre Peninsula of South Australia in 1930 as the daughter of a Lutheran pastor, under conditions the modern generation can hardly imagine. Likewise, they can hardly imagine the childhood of Leon, born in 1927 on a farm in Nebraska. His father wanted him to continue as a farmer, but having lived through the Great Depression and the Dust Bowl, that was one occupation he was determined to avoid. Since his older brother was a Lutheran pastor, he decided he would try it out as well but, as he explained, he had not yet received The Call, and so his heart wasn't in it. He flunked his exams.
Instead, he was sent over to New Guinea, as a carpenter and general tradesman to help rebuild the church in New Guinea, devastated by the war. It was during that period, 1946 to 1949, that he did, in fact, receive the call to be a missionary in New Guinea. And now, here is one of those events which fools call luck or chance, and bigger fools call fate. Due to mismanagement of the arrangements for his return home, he ended up stuck in Sydney for just under six weeks, and was forced to board with - would you believe? - Theophila's family, who had moved there. It was virtually love at first sight.
Then followed a five year courtship by mail and telephone while Leon studied for ordination. At the end of five years, he was back in Australia, and in just sixty days they were reunited, married, honeymooned, and setting off for a new life in New Guinea. Of course, this is not the sort of thing you read about in the trashy romance novels, because fiction has to be plausible, while real life is under no such constraint.
And what was it like in New Guinea? To call it exotic would be an understatement. There the Australian colonial administration had established some sort of peace and order on a stone age agricultural society where internecine warfare, sorcery, and horrible diseases had previously reigned unchecked for thousands of years. Fortunately, by this time cannibalism and headhunting had been eliminated from the areas where they worked, but it didn't mean everything was calm. Once a war party invaded the mission grounds. On another occasion Leon attempted to intervene in a native war.
At one stage they were posted to a station so remote that, for the birth of their second child (my wife), they had to walk fifty kilometres just to reach the roadhead, and then return across flooded rivers in the teeth of the monsoon. (That's a story in itself.) Leon made repeated expeditions into a fever ridden valley. He came down with a terrible tropical disease. The witchdoctors attempted to drive them out with black magic. They suffered personal family tragedy. 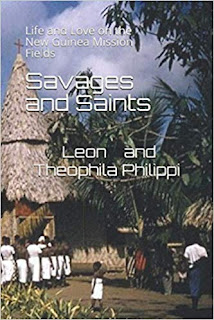 In early 1972 they migrated to Australia, where they served the church as pastor and wife until retirement. Leon and Theophila were joined at the hip for 63 years, until Theophila passed away peacefully in the presence of her family in 2017.
Esther commented that her father is not backward in volunteering the information that he had once been a missionary in New Guinea. Well, I pointed out, that is his identity. For a quarter of a century he was either working there, or working to get back there. That was the cause to which he dedicated his youth. It was the place to which he brought his bride, where he raised his children, and where he buried one.
Now I am pleased to announce that their memoires of this period, and of their respective childhoods, have at last been published, with yours truly as the ghost writer. The book is based on their own written accounts, Leon's formal diaries, and personal interviews. The draft of each chapter was forwarded to both of them for correction and additions, so that I could be sure that it was as they intended. The title is Savages and Saints, life and love on the New Guinea mission fields by Leon and Theophila Philippi, and is available from Amazon in both paperback and Kindle editions.
Posted by Malcolm Smith at 3:41 AM